The Adhyatma Yoga Handbook contains an introduction and overview of the essential teachings on the way to Self-Knowledge.

It was compiled from the writings of Hari Prasad Shastri and close pupils, and originally published in the ‘Foyles Handbook’ series.

The book is arranged in five sections covering:

The following is an extract from the section on Philosophy:

SUMMARY OF ADVAITA (NON-DUALISM)
There are six main systems in Indian philosophy of which the Advaita Vedanta is the last and the most complete. To a great extent the six systems may be said to be complementary to one another, and the Advaita borrows extensively from the other five. What follows is a necessarily brief summary of Advaita Vedanta, based on the writings of the acknowledged master-philosopher of Yoga, Shri Shankaracharya. The essence of the philosophy of Advaita is to be found in the couplet:

Brahma satyam jagan mithya
Jivo Brahmaiva no parah.
God is real, the world is illusory,
The individual soul and God are one and the same.

There is a mystery hidden in the commonest objects of the world.‘Ordinariness’ is the veil hiding the extraordinary. It is our common experience that ‘things are not what they seem’. For instance, a writer is sitting at what seems to him a solid writing desk, brown in colour and smooth to the touch. But is it really ‘solid’, ‘brown’ and ‘smooth’? A more searching analysis shows this picture painted by his senses to be an illusion. The desk is not ‘solid’ but a large number of disconnected particles gyrating in space; as the light changes, the particular ‘brown’ colour also changes; and the ‘smooth’ surface is shown up under a microscope as a fiercely jagged edge.

The notions of time, space and causation which are the framework of the world experience can also be shown to be self-contradictory and logically inexplicable. For instance, the writer says that ‘the desk changes’ from moment to moment because of the different configuration of atoms or the alteration in the light. This involves the contradiction that something which remains the same, namely ‘the desk’, becomes different. In this respect the Vedanta anticipates the conclusion of the English philosopher F. H. Bradley, that “the world, as so understood, contradicts itself and is therefore appearance and not Reality”.

The Adhyatma Yoga Handbook is a helpful, readable introduction to the subject. 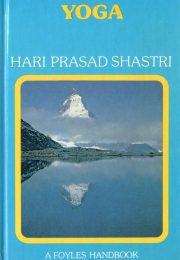