On the Affirmations Underlying Yoga

The spiritual affirmations which underlie this Yoga are tremendous and startling. If they awaken immediate antagonism in you, or shock you, this Yoga is very probably not for you at present. But if they arouse a feeling of awe, or even of curiosity, prepare to make the spiritual experiments which will prove their truth to you.

The word ‘affirmation’ is used rather than ‘philosophy’, because philosophy to us has a very different meaning from the meaning it bears in the East. Here, the popular conception of philosophy is that it is a mental approach to fundamental questions, such as the nature of God and the soul, the nature of good and evil, and the goal of life; and that the answers to these problems which it supplies must be based on and supported by reason and logic. The activity is mental; devotion and reverence are not characteristics expected of a philosopher.

In the East, on the contrary, the questions considered are the same, but the answers to them are obtained, not by reasoning, but by direct spiritual experience. In other words, those philosophers who have influenced thought in the East, have been seers, saints and the trainers of saints as well. Their opinions were never personal opinions, but pronouncements made while in a state of consciousness in which they transcended the finite personality.

In the West we tend to think that if a man is intelligent enough he can know anything. In the East they believe that if he is pure enough he will know everything. They look upon philosophy, the pursuit of knowledge, as a sacrifice to God, and it is one of the paths which lead to Him — the path of jnana (knowledge). Until the man has undergone a course of spiritual discipline and self-purification, no truth that he hears will germinate and bear fruit, and he will only be performing lip-service to God by trying to solve His mysteries.

Consciousness does not evolve. It is present in its totality as the substratum of everything all the time, from man to rock, stick or stone, but it is veiled in varying degrees of density. The task of man is to remove these veils, but he cannot do this until he has gained some degree of mastery over his lower nature and recognition of his higher nature. This mastery and understanding is achieved as a result of the yogic training and discipline.

The human mind, dominated by animal instincts, or at best by logic and reason, cannot know God. It operates in the region of duality, and although it may obtain an intellectual conception of Him, it sinks down and evaporates before the vision of non-duality. If the lower mind can only operate in duality, and God is One, how can He be known? Behind the lower mind, so to say, and obscured by the unrest and activity of the lower mind, there is a super-conscious mind, the enlightened intellect — the faculty of spiritual perception — and when the lower mind has been stilled by discipline and the grace and instruction of the teacher, this higher faculty can be located and used. 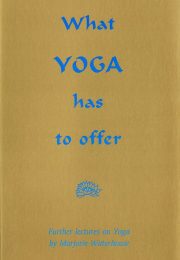