The Crest Jewel of Wisdom is a well-known and widely-studied classic on the non-dual teachings.

It consists of nearly 600 verses and covers all the main aspects of the teachings. It begins with the qualities needed on the path. Next it presents philosophical ideas that enable us to look on the world from the non-dual perspective. Then it gives the methods by which we can progress to inner illumination, such as giving up attachment to what is transient and practising right concentration and meditation.

This book can be studied as a comprehensive text-book of the essential non-dual teachings.

For a long time scholars believed that this text was written by Shri Shankara Acharya himself, the philosopher-saint who probably lived in the seventh or eight century CE and gave the non-dual teachings the definitive form in which they have come down to us. Others now believe that it was written by an enlightened follower of Shri Shankara some time later. Either way, it is a comprehensive and authoritative presentation of the teachings.

In this edition, the text has been supplemented by an extensive commentary by Hari Prasad Shastri, which show how Shri Shankara’s teachings are still reliable and helpful, while bringing in related ideas from modern culture and other spiritual traditions.

The original Sanskrit title of this text is Viveka-Chudamani. Viveka means the ability to distinguish, or discern, between Truth and falsehood. The path may be seen as a gradual process of deepening Viveka, whereby we learn to discern between true and false, real and apparent, enduring and transient, Self and not-self, at first in theory, and then in direct experience.

The text contains some ideas which may appear somewhat arcane, such as the teaching that we are comprised of five bodies or ‘sheaths’ (the physical body, vital energy, senses, mind, and bliss). These are only intended as ways of helping to distinguish between our true Self, and everything that appears as an object in experience. We need not be distracted by any apparent incongruity between such ideas and the modern view of ourselves and the world.

The Crest Jewel of Wisdom is a good book for some careful study, to deepen and broaden our understanding of the non-dual principles. 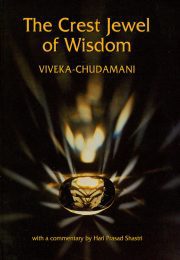