Philosophy of Love: The Narada Sutras

The Narada Sutras is a classic text on loving devotion to God as a way to enlightenment.

It describes the nature of true love, how to nurture it, and why this love leads to the discovery that the Self of the lover and the supreme object of love, are one. The text is one of the foundations of the devotional side of the traditional non-dual teachings.

This way of approach can be practiced without a deep study of philosophical details, and while living an active life in the world.

These Sutras are traditionally attributed to a sage of Vedic times called Narada, who is often depicted as a celestial musician as well as teacher of higher devotion and knowledge.

The text is 84 verses long. It has been translated into English by Hari Prasad Shastri, with an extensive commentary to make the meaning clear. Here are two verses with commentary:

Sutra 51. The nature of love is indescribable.

Commentary: The means to devotion can be described, but not the sweetness of devotion itself. When it is impossible to describe the taste of an apple to a man who has never tasted one, how can the delight of supreme love be communicated by words?

Sutra 52. It is like the tasting of delicious fruit by a dumb man.

Great and most fascinating are the joys following the experience of the love of the Lord. Passing the range of familiar emotions and arising in the spiritual region of the mind, they beget feelings never before experienced. It is neither a stimulating feeling nor a thrill nor ordinary self-forgetfulness, such as is caused by intercourse with friends or the enjoyment of beauty. It is something which is produced without the aid of an external stimulus; it is a vision which transforms the being of the devotee affecting his empirical life to an extent that may be considered revolutionary. All sense of outer beauty and ugliness, all pairs of opposites, give way to a new spiritual outlook in which the Lord is all in all, and the rest His shadow.

The Narada Sutras will be helpful to sincere students of non-duality who are inclined to devotion or recognise its importance on the way. 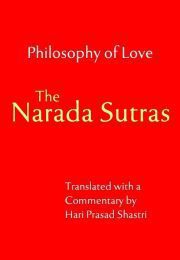