Verses from the Upanishads

These Verses from the Upanishads have been selected for their particular interest and teaching value to those looking for knowledge of the true Self through meditation and the related practices.

They have been translated from the original Sanskrit into English, with a full commentary, by Hari Prasad Shastri who had confirmed the highest teachings of the Upanishads and passed on the non-dual teachings in the traditional way.

The essential teachings of the Upanishads, which are of great antiquity, have been re-stated in the Bhagavad Gita and other texts composed by illumined sages, in more recent times. However, a familiarity with the particular expressions of the Upanishads helps us to appreciate the true significance and value of the teachings. By approaching them with respectful receptivity we open our minds to the source of the highest wisdom and guidance that has nurtured humanity since the dawn of history.

The verses have been drawn from the Isha, Katha, Mundaka, Aitareya, Taittiriya, Kena and Shvetashvatara Upanishads. Here is an extract from one of them:

The man of keen intelligence restrains his mind from the objective world and focuses it on his true Self, Atman, which is most ancient, hard to perceive, and abides secretly in the innermost cave of the intellect. He transcends joy and grief by realising this Atman which appears to be seated in the dark surroundings of the mind. [Katha Upanishad I. 2. 12]

Commentary: The first thing that a candidate for spiritual wisdom has to acquire is mastery over his mind. By constant practice of meditation, by right discernment, by renouncing his own personality in favour of Guru and God, he can manipulate his mind and focus it on the Self. He realises the universality and infinitude of his ‘I am’. The Self is to be imagined as shining forth in the intelligence. It is not to be confused with the woes and worries of the mind.

Let the consciousness in man renounce all that is the object within and without, and focus the mind on the Self, which is said to be most ancient. The Self is subject to neither joy nor grief, is neither superior nor inferior, and should be meditated upon as such.

Verses from the Upanishads would be valuable background reading for sincere students of non-duality. 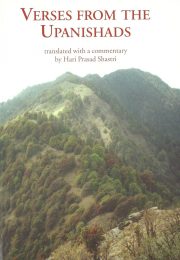