Wisdom from the East

Wisdom from the East contains lectures on the non-dual view and the way to Self-realisation, given by Hari Prasad Shastri.

The teachings cannot be entirely systematized, and the various subjects are closely interwoven. The presentation by HPS here helps us, each time we read and re-read them, to gain deeper insights into the true significance of the teachings for ourselves personally.

There are chapters on:

Creation
Brahman and Ishvara
Maya
The Individual Self
Three Paths
Action and the Three Bodies
Ethics
Superimposition
The Path of Knowledge
The Witness Self
OM
Meditation (six chapters, with practices)

The following is an extract from the chapter on ‘Creation’:

There is no such word in Sanskrit as “creation” applied to the universe. The Sanskrit word corresponding to creation is srishti, which means projection. Projection means to bring something into being out of nothing, to create as a novelist creates a character. There was no Miranda, for example, until Shakespeare created her. Similarly the ancient Indians (this term is inaccurately used as there was no India at that time), who were our ancestors long long ago, used a word for creation which means projection…

We derive our knowledge of God ordinarily through mental experience and our experience whether conceptual or perceptual is necessarily often faulty, defective and subject to change. The bottom of the sea of science is strewn with the debris of obsolete theories discarded from the time of Aristotle till now, and this is called improvement and evolution. Obviously our experiences conceptual and perceptual are often invalid and inadequate.

But the experience of God is intuitional and above the realm of dialectics, though logic does not contradict it. It is consistent, whole and verifiable by others by means of a purified heart, harmony of emotions and inner spiritual communion. It has been so in all ages and climes.

God is experienced inwardly as consciousness absolute. Then That becomes This in the same sense that eternity becomes eternal now to one who knows. In his great novel Wilhelm Meister, Goethe’s hero, when camping with the gypsies, says, “I have heard of eternity but have never understood it”, and then a flash of light strikes him and he adds, “God must be eternity—past present and future—for all phases of time live in eternity, yet eternity transcends them all”.

Wisdom from the East may provide committed students with a deeper understanding of the non-dual philosophy. By reflecting on what we learn, and making the necessary inner adjustments, we can progressively uncover the source of inner light. 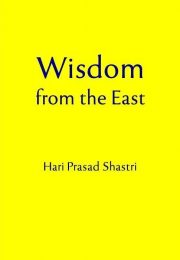